When Gareth and I was in Slovenia back in June, we decided we wanted to see as much as possible in our short stay. So with this in mind, we booked ourselves last minute onto a tour with 3glav Adventures, which would take us all around Triglav National Park (Slovenia’s only National Park). The tour itself cost €75, which for everything we did was absolutely amazing, and we paid the optional €35 to go white water rafting on the River Soca in the afternoon. So if you’re thinking of visiting Slovenia, I would definitely recommend this tour, and to give you a bit more of an idea of what it entails, here’s what we did! 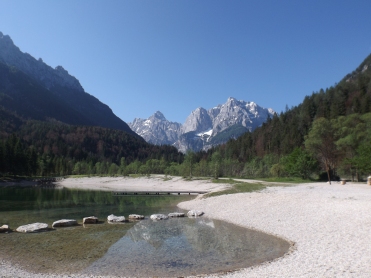 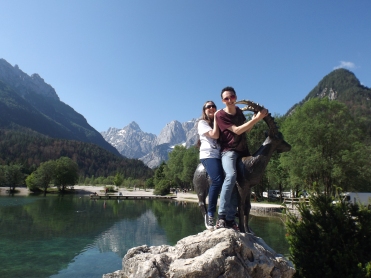 We were picked up from our hotel at 8:05 in a minivan, and much to our surprise realised we’d booked onto the tour with a group of extremely hungover uni students. Because of this, we were able to sit in the front of the minivan with our guide who constantly pointed out interesting things, which really enriched the day as we learnt a lot more than I thought we would! Our first stop, after about half an hour’s drive, was at Kranjska Gora and some lakes there. The lakes were beautiful and overlooked by snowy mountains, so was the perfect stop for the day. It was also interesting to find out that they shoot a lot of adverts there – with one for Hungarian beer being shot while we were there! There’s also a statue of a goat with golden horns there which relates to a Slovenian myth – and everyone was encouraged to climb onto the statue for good luck! 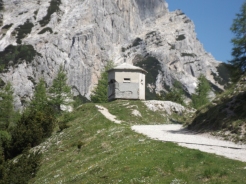 From there, we headed into the mountains, which provided some outstanding views, before stopping at Vrsic Mountain Pass, which is the highest mountain pass in Slovenia. We climbed the pass – taking some goat trails to give an authentic experience! – which took about half an hour. While it was extremely hot and tiring, it was well worth it. There’s also a part of the mountain which looks like a face (and it’s not even one you have to squint at to see, it’s blatantly obvious!), and is called the Pagan Girl. This was also really interesting, because the myth about it related to the myth about the goat! The views from the mountains were beautiful, and it’s interesting to know how close to Austria we were!

Next we headed to a number of points along the River Soca, which is the most beautiful emerald colour I’ve ever seen! First we were taken to the River Soca Source, which are beautiful springs which run into the river. They’re so clean that it’s possible to drink from them – which we did, taking the chance to fill up our water bottles. It was quite a walk up some steep rocks – which is pretty challenging if you’re vertically challenged like myself – but it was well worth it! We also headed to a ridge overlooking the river, which might just be the most picturesque place I’ve ever been, and was well worth doing the day if just for the view!

After stopping for lunch in a lovely little town (the name of which I cant remember – if anyone’s done the tour, please let me know in the comments!), we went white water rafting on the River Soca. This activity was optional, and cost an extra €35, but the value for money was outstanding. The activity itself was one of the coolest things I’ve ever done, so I would definitely recommend doing so! After getting kitted up in wetsuits and lifejackets, we were put into teams and carried the rafts down. The guide for this activity was so well experienced it didn’t feel at all dangerous. We started off on an easier section of the river, before stopping to swim! The guides also set up a slide off of a rock into the river with one of the rafts which was extremely fun, even though the water was freezing! After this, we moved onto the harder section of the river, and whizzing along all of the rapids was one of the most exhilarating experiences of my life! Every so often I would look up as well, and we would just be surrounded by mountains and greenery, it was almost surreal! This activity lasted about an hour and a half, but it was still a surprise it was over so quickly! 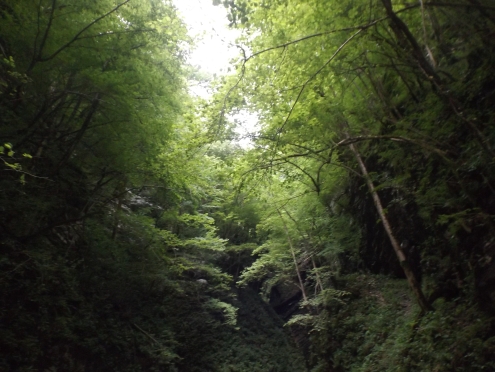 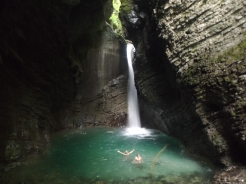 After the rafting, we clambered back into the minivans to head to Kozjak Waterfall. It was a bit of a hike to get there, including clambering over planks of wood and a rope bridge, but it was well worth it! I wasn’t sure what I was expecting from this waterfall, but I didn’t get anywhere close with my predictions. The closer we got, the denser the greenery became and it didn’t feel like we were out in the open anymore. The waterfall itself was in a cave-like structure with just a bit of sunlight seeping through, and to view it you had to climb up some steps and edge your way around a narrow length of wood! There was also an opportunity to go swimming in the waterfall, but it was absolutely freezing so we didn’t go in for very long!

After heading to the waterfall, it unfortunately began to rain, but we still headed to the next viewpoint which was another bridge over the River. At this point, the river widens out so much I thought it was a lake, but it’s still the most beautiful blue-green colour I’ve ever seen! Here we had the opportunity to jump from a 12m high bridge into the river, but were not able to as it had started to thunder so was too dangerous. Regardless, the view was outstanding and it was well worth stopping here!

After this a thunder storm really kicked in, and we weren’t able to get out the car without getting soaked through. This came at a really lucky time though, as we were booked to go onto a cargo train – in the cars! – which took us back through the mountains, rather than having to go around. There was some beautiful views from here, but it was also nice to sit back and rest after all the morning’s activities!

Our final stop of the day was Bohinj, which is the largest lake in Slovenia. It was trying to get here where we ran into a bit of trouble as the car wouldn’t start! So it ended up with me, Gareth and a bunch of very hung-over students pushing the minivan down a hill to get it started! This was almost surreal, but hilarious and I’m just thankful that the car started! Bohinj was beautiful, with the clouds rolling down onto it, and even though we were only here for 5 minutes, I’m still glad we came! After this, we headed back to Bled –after a good 12 hour day!

If you get the chance to go on a 3glav tour, I would definitely recommend this one (although with the excellent organization and guides on the day I feel like all of their activities are memorable!). However, if you do go, I would recommend taking snacks as all the hiking is exhausting! The company provide water throughout the day, so don’t worry about that, and they also take photos – leading to us getting some amazing ones of us rafting that we wouldn’t have got otherwise – so this company really does go the extra mile! If you don’t do a tour, I would still recommend trying to see some of these sights, as all of them were outstanding! And if you are interested, here’s their website: http://www.3glav.com/

Have any of you been to Slovenia? If so, what did you get up to? 🙂

10 thoughts on “A Day in Triglav National Park, Slovenia”