Sorry about the delay in updating, I’ve had a crazy few days and haven’t quite got the hang of scheduling yet, I’m trying my best, and will hopefully be a bit more regular from now! On Friday, I had the excitement of finally having a full day off work, and with Gareth having just got back from a week away it was made even better. However, our plans to go to Salcey Forest were abandoned due to the charming British weather we were greeted with Friday morning. But in the name of making the most of a rainy day, we looked at everything we could do instead. And after deciding to go for a drive and explore, we came across the Hell-Fire Caves in West Wycombe.

After a hellish drive there, due to the Sat Nav taking us the weirdest route possible, we arrived in West Wycombe, to find it was a beautiful little village – completely different to what I thought it would be, having been to High Wycombe before! After a short walk through the village, we finally arrived at the Hell-Fire Caves. For those of you who have never heard of them, the Hell-Fire Caves are a man-made set of caves, built in the 1700’s and were the meeting place of the Hell-Fire Club until it broke up. We also found out that part of the reason for the club breaking up was due to one of the members dressing a baboon up as the devil and letting it loose in the caves, causing another member (the Lord of Sandwich I think), to panic, thinking he was genuinely being attacked by the devil. It’s now open to visitors, and is brilliant for a day out. Almost immediately after entering the caves, there were carvings done on the wall back when the Caves were in use by the Club, and also historical notes for you to read as you went past. It took quite a long time to walk through, but despite the chill from being underground, it was incredibly interesting to see how they were built and how they were used, as well as it being a slightly creepy, but awesome experience. There were unexpected parts of the caves as well, including the underground lake/cavern and the “Banquet Hall” which opened out into a much larger Cave. The most interesting part might have been the cave built directly underneath the Church, where it sounded like you could hear voices from the Church. There were also some incredibly creepy statues in the caves, although those are likely to have been added when the Caves were restored for visitors.

After coming back into the real world, we climbed the most enormous hill (and I’m not exaggerating, it felt like I was on Vesuvius all over again), to get to the Mausoleum and Church at the top. The Mausoleum was really cool and although you couldn’t go in, you could see into it, and the view was amazing. Unfortunately the Church wasn’t open when we went, but apparently you can go right up the Church tower when it is, and the view is supposed to be breath-taking. After the walk back down the hill (which was significantly easier than going up!), we walked back through the village and got ready for the drive home (although this time we decided to go a more logical route back, rather than following the Sat Navs attempts to take us back down the M1).

All in all, despite the disappointment of waking up to a rainy day on my day off, you can always find something enjoyable to do, and there are so many things to do and places to see – even close to home! 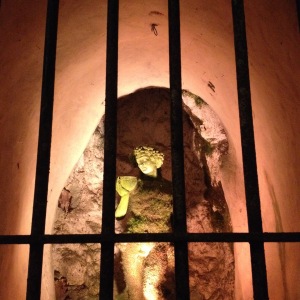 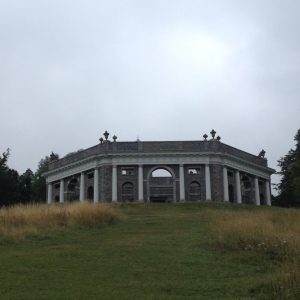 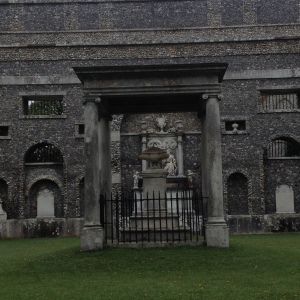